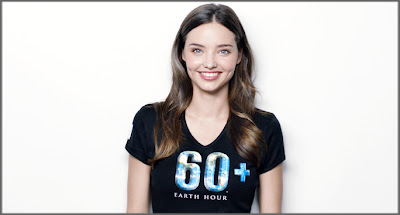 The global community has come out in force for Earth Hour as social media has energized and inspired communities across the Middle East, Africa and Europe to unite for a common cause – the protection of the planet.
From former war-torn countries to the great cities of Europe, Earth Hour is being celebrated by all walks of life as it offers an hour of inspiration to change our future to one that is sustainable.
As ESA Astronaut Andre Kuipers is watching over Earth from the International Space Station, using Twitter to share photos of areas under threat like the Amazon, Nelson Mandela, the Former President of South Africa tweeted, "Let us stand together to make of our world a sustainable source for our future as humanity on this planet" #NelsonMandela #EarthHour”.
Facebook has been used to coordinate Earth Hour in Kurdistan, Northern Iraq as well as in Libya’s capital Tripoli, which was run by nineteen-year-old Mohammad Nattah and Muhammad Bugashata.
Earth Hour celebrations were held at the Red Saraya Museum and Martyrs' Square - the site where thousands of men, women, and children celebrated the end of the Qaddafi regime. With the help of the local scout team, Libya's second biggest city Benghazi also took part with lights turning off at Al Daawa al-Islamiyah Trade building, Tebisty Hotel and Keash Square.
Thousands of I Will If You Will challenges have been made since Earth Hour’s journey across the globe began in South Pacific Island of Samoa just over 12 hours ago. More than 100,000 individuals have already promised to adopt sustainability practices by accepting the challenges on YouTube and Facebook.
“From Beijing to Berlin, from Singapore to San Francisco, people are turning out their lights tonight to signal their concern about the future of our life on this earth,” said WWF International Director General Jim Leape, speaking from a pedal powered concert in the shadow of Castel Sant’Angelo as famous landmarks in Rome and the Vatican went dark for Ora Della Terra celebrations.
“This is a night when we come together as single global community demanding action and committing ourselves to act in our own lives. So it is a symbol tonight, but it is also a dedication to each of us taking action to do what we can do to help make life more sustainable on this planet.”
Jim Leape will soon be heading to the Mediterranean to fulfill his I Will If You Will challenge of tagging endangered bluefin tuna for a long-running WWF scientific research project.
“Social media is not just connecting the world but is becoming the primary organizing tool for citizens to take action. People from over 150 countries across the globe are harnessing the power of online platforms to physically care for the future of the planet,” Earth Hour Co-Founder and Executive Director, Andy Ridley said.
“If we can do this for Earth Hour, imagine what can be achieved for the planet beyond this hour.”
In the UAE, the world’s tallest skyscraper - Dubai’s Burj Kalifa, plunged into darkness as Dubai Municipality, the Burj Al Arab, Etisalat, and the Clock Tower also switched off their lights.
In Russia, organisers estimated that some 15 million people observed Earth Hour – a massive 40 percent more than the previous year. The country, stretching across nine time zones, records the longest participation of any country in Earth Hour.
Major celebrations were held at Vorobyovy Goary (Sparrow Hills) in Moscow, which thanks to its elevation, enjoyed spectacular views of 75 famous structures including the Luzhniki stadium just across the Moscow River, Moscow City Hall, several high-standing going dark across the skyline.
Greece used Facebook to spread the message that conservation is not a luxury, it’s a necessity with its Earth Hour celebrations - warning that assaults on the environment in the name of overcoming its economic crisis were misguided.  With the slogan “We Can Save”, WWF Greece asked Earth Hour participants to upload and share a message of what they think can be saved in an effort to protect the environment.
Close to 300 cities and towns across Austria, Hungary, Romania, Bulgaria, Serbia, Croatia and Ukraine observed Earth Hour.  In Austria Earth Hour gained the support of both President Heinz Fischer and Chancellor Werner Faymann, who switched off the lights of Vienna’s Imperial Castle, the President’s residence, and the Chancellery buildings.  In Croatia, a much older centre of power - Roman Emperor Diocletian’s palace in the historic city of Split - joined sites in capital Zagreb in switching off.
Germany’s official celebration was centred around Berlin’s famous Brandenburg Gate. More than 230 monuments and major gathering points in Paris dimmed the lights for an hour, including the Eiffel Tower, Notre Dame Cathedral, the Arc de Triumph, as well as fountains and bridges over the Seine.
In London, a human powered dance floor lit up the UK’s flagship Earth Hour event at Somerset House. Street dance troupe Flawless, stars of Britain’s Got Talent and new film StreetDance 2 counted down to switch off and performed a twilight routine. As local landmarks including the National Theatre, South Bank Centre and Waterloo Bridge went dark, street band the Luminites performed to Earth Hour supporters whilst WWF ambassador Tom Aitkens and his staff served sustainable canapés.
Other iconic landmarks switched off or dimmed across the UK included Big Ben and the Houses of Parliament, Buckingham Palace, EDF Energy London Eye (dimmed only), Wembley, Royal Albert Hall, National Gallery, Old Trafford, Clifton Suspension Bridge, Edinburgh Castle, the Millennium Centre and the lights of Piccadilly Circus. Earth Hour 2012 is taking place in a record 150 countries and territories across 6494 towns and cities.