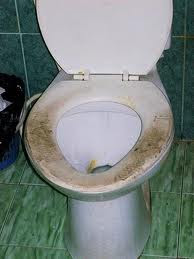 To all the females out there, have you ever seen this?
(I don't know about the guys' toilet though. Haha.)
Some computer keyboards harbour more harmful bacteria than a toilet seat, research has suggested.
Consumer group Which? said tests at its London offices found equipment carrying bugs that could cause food poisoning.
Out of 33 keyboards swabbed, four were regarded as a potential health hazard and one harboured five times more germs than one of the office's toilet seats.
Microbiologist Dr Peter Wilson said a keyboard was often "a reflection of what is in your nose and in your gut".
During the Which? tests in January this year, a microbiologist deemed one of the office's keyboards to be so dirty he ordered it to be removed, quarantined and cleaned.
It had 150 times the recommended limit for bacteria - five times as filthy as a lavatory seat tested at the same time, the research found.
The equipment was swabbed for bugs, such as those that can cause food poisoning like E.coli and staphylococcus aureus.
Dr Wilson, a consultant microbiologist at University College London Hospital, told BBC Radio 5 Live sharing a keyboard could be passing on illnesses among office workers.
"If you look at what grows on computer keyboards, and hospitals are worse, believe it or not, it's more or less a reflection of what's in your nose and in your gut," he said.
"Should somebody have a cold in your office, or even have gastroenteritis, you're very likely to pick it up from a keyboard."
Which? said one of the causes of dirty keyboards was users eating lunch at their desk, with crumbs encouraging the growth of bacteria.
Poor personal hygiene, such as not washing hands after going to the toilet, could also be to blame, it said.
Cleaning techniques
Which? computing editor Sarah Kidner advised users to give their computer "a spring clean".
"It's quite simple to do and could prevent your computer from becoming a health hazard," she said.
She said dust and food crumbs should be shaken out of keyboards and they should be wiped with a soft, lightly dampened, lint-free cloth. They should also be disinfected with alcohol wipes.
Research by the University of Arizona last year found the average office desktop harboured 400 times more bacteria than the average office toilet seat.
They also found that, compared to men, on average women have three to four times the amount of germs in, on and around their work area.
Keyboards dirtier than toilets!