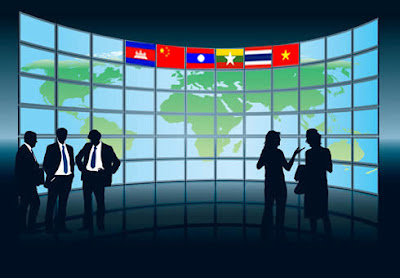 ASEAN COMMUNITY 2015 BACKGROUNDThe ASEAN Economic Community (AEC) is a plan of economic integration that will lead to the creation of a single market and production base by 2015 and is one of the three pillars to achieve a cohesive ASEAN Community, the other two are political/security and social cultural pillars. The AEC will transform ASEAN into a region with free movement of goods, services, investment, skilled labour and freer flow of capital. Free Trade Area (FTAs) will ensure ASEAN members gain greater market access in terms of trading partners and attracting foreign direct investments to ASEAN.
The main objectives of AEC are to create a single  market and production base, highly competitive  economic region, region of equitable economic  development and region fully integrated into the global economy.
THE STUMBLING BLOCK
Analysts have voiced their concern that the group’s plan to move towards an ASEAN Community by 2015 is not moving along as it should and there seems to be a gap between plan and action.Initially, the ASEAN Community was scheduled to happen by 2020 but in the face of growing competition from economic giants like China and India, the timing was accelerated to 2015 and it would be a great loss if the timeline is pushed out again, in terms of foreign investment loss. The key problem seems to be the non-implementation of economic integration agreements while laws need to be passed for the implementation of the agreements and finance ministries in each country need to put provisions in for the plan to take effect. The diverse level of governance in each ASEAN country also causes problems in the implementation of the economic integration agreement. Case in study is Myanmar,with the country’s position regarding the West.  A single market without consistent and effective regulation will not appeal to investors but the stumbling block seems to be the acceptability of increased roles of regional institutions by ASEAN national leaders.
Are We Prepared For AEC 2015?