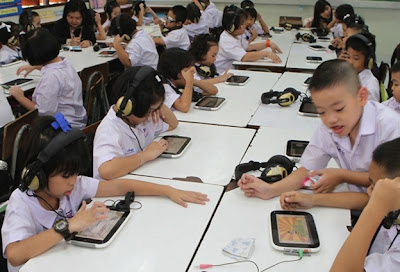 Teachers and students are still waiting to find out what brand of tablets they will be using when the school year opens. APICHIT JINAKUL
Wednesday update: Shenzhen Scope Scientific has won the bid to supply 900,000 tablet computers for school first-graders for a second time. The company raised its price by US$1 (30.6 baht) to $82 to cover the insurance and freight charges which were not included in the first offer.The selection of the Scope tablets should be finalised today – unless there is another change of mind.

Panel didn't spot Scope tablets' hidden chargesSuchit Leesa-nguansukThe government's plan to acquire 900,000 tablets for school pupils looks like turning into a fiasco after a panel re-opened bidding on the scheme despite having already selected a winner last week.The move has raised suspicions of possible political interference and graft in the bidding process.But Information and Communication Technology Minister Anudith Nakornthap denied any irregularities, saying new bids have been called because it was found the price quoted by the previously selected Chinese computer maker was not as cheap as it was thought to be.Shenzhen Scope Scientific Development, offered a price of US$81 (about 2,400 baht) apiece which was based on free-on-board terms, meaning there can be an extra charge for the transport cost of each tablet.As a result, Thai authorities last week decided to ask all four potential suppliers – Scope, TCL Cooperation, Haier Information Technology (Shenzhen) Co, and Huawei Technologies Co, which were recommended by the Chinese government, to resubmit their bids."The committee working on the tablet policy is due to open bid envelopes either today or tomorrow," said Gp Capt Anudith.In the original bidding, Scope was selected on March 5 by a government panel to supply 900,000 tablet computers for first-graders in primary schools at the price of $81.The other companies in the reckoning had offered to supply the tablets at higher prices. TCL offered $89, Haier offered $105 and Huawei proposed $135.The selection of a winner this time will not be based solely on the price, but will include transportation costs, extra product specifications, after sales services, warranty, insurance costs, manufacturing capacity, supplier's credibilityand other special offers, the minister said.Scope was considered the dark horse when it was named as the winner in the first bidding contest amid rumoursthat an influential figure in the ruling Pheu Thai Party preferred Huawei as the supplier.The reopening of the bidding contest has sparked speculation the move might be politically motivated.But Gp Capt Anudith denied this, saying politics had nothing to do with the bidding process.He also said Monday Huawei's first bid was simply too high.He said the bidders might offer higher tablet specifications than those required in the new bid. Gp Capt Anudith alsoscoffed at rumours working the rounds on social-networking websites that Scope sells tablets on the retail market in China at only 1,000 baht a unit – less than half the price it offered the Thai government. He said Scope's retail price is actually 8,000 baht and its quote to the Thai government was a special rate under a government-to-government agreement.The government's specifications for the tablet include requirements that it must have a seven-inch touch screen, a main storage unit of 16GB, 1GHz single core CPU or higher, 512MB RAM or higher and an Android 3.2 operating system compatible with Android 4.0.After the new bids are opened, the ICT Ministry will propose the winning bid be sent for cabinet approval on March 20. He said the development of content in eight subjects is complete so tablet distribution would be on schedule for the next semester in May. Of the 900,000 tablets the government will purchase, 860,000 will be distributed to all of the country's Prathom 1 (Grade 1) students and the rest will be earmarked for teachers or kept in reserve.
Writer: Terry Fredrickson
Position: Education Marketing and Support Manager
http://www.bangkokpost.com/learning/learning-from-news/284150/red-faces-as-tablet-bidding-reopens