Showing posts from February, 2012
Show all

Does an all-expense-paid tropical getaway to an amazing international destination sound too good to be true? It's not. Discovery Student Adventures invites you to enter Discovery Education 's sweepstakes for your chance at a trip to Costa Rica . The lucky winner will spend 5 incredible days exploring this beautiful country where they will: Soar high above the rainforest on a zipline and spot exotic wildlife Saddle up and experience the country's diversity on horseback Relax and unwind on a sunset cruise and snorkel with sea life This trip is exclusively for teachers . Educators from across the country recently returned from Costa Rica. Check out the unforgettable time they had by visiting our  teachers adventure blog .  Related articles Manual Antonio - Manual Antonio, Costa Rica (travelpod.com) Costa Rica adventure tour to the Palo Verde National Park in Costa Rica (travelnews2010.wordpress.com) FloresBrowns shared their blog post on Twitter (bloggymoms.c
Post a Comment
Read more

Seven Ways Online Students Can Prepare for School This Summer 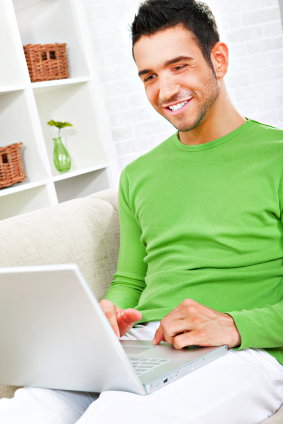 For many online students, summer break isn’t exactly a break. Plenty of online students are not exactly your typical college student . They’re likely to have families and full-time jobs to deal with in addition to classes.  So as an  online student , maybe you’re not spending your summer break sitting by the pool. But even if you’re busy, there are a few things you can do to prepare for school in the fall that will make your life easier once the semester starts up again. Get a dedicated Internet line If you don’t already have Internet at your house, get it. This is absolutely necessary for online students. What good is the flexibility of an  online degree program  if you have to worry that the internet connection you’re “borrowing” from a neighbor will fail at the wrong time, or go to a library or café to study? Go with an Internet service that can handle the demands of delivering your online classes .  Related articles Ontario universities urged to move more classes online (cbc.
Post a Comment
Read more

Image by Getty Images via @daylife By  LAURA MCMULLEN President Barack Obama announced last week that 10 states will be exempt from the requirements of the  highly-criticized No Child Left Behind legislation . In exchange, those states will have to agree to a series of reforms. But some experts say the law should be scrapped completely for models that don't rely on standardized tests . "It behooves us to take a careful look at the policies at the heart of NCLB , because they have not worked, [and] if they are not working, we need to change them," said Monty Neill, chair of the  Forum on Educational Accountability  (FEA), at the FEA House Briefing on Assessment last Thursday. Related articles Four Years After 'No Child Left Behind,' Rick Santorum Called It 'Historic' And 'Important' (abcnews.go.com) 10 States Freed From 'No Child Left Behind' Requirements (brandtstandard.com) Editorial: NCLB waiver not a reprieve but a call to
Post a Comment
Read more 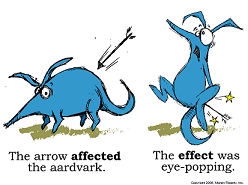 Grammar Girl here. This is an expanded show based on the original episode covering when to use  affect  with an  a  and when to use  effect  with an  e . I get asked whether to use  affect  or  effect  all the time and it is by far the most requested grammar topic, so I have a few mnemonics and a matching cartoon to help you remember. What Is the Difference Between  Affec t and  Effect ? Before we get to the memory trick though, I want to explain the difference between the two words. It's actually pretty straightforward. The majority of the time you use  affect  with an  a  as a  verb  and  effect  with an  e  as a  noun . Thanks to Randall Munroe from  XKCD.com  who drew the stickman cartoon. Related articles Grammar is here (hellobarc.wordpress.com) How 'Grammar Girl' Turned Her Podcast Hobby Into A Media Empire (businessinsider.com) Review: Grammar Girl's Quick and Dirty Tips for Better Writing (crookedprose.wordpress.com) Writing Tip #71 (makingbab
Post a Comment
Read more

The idea that  U.S.  public schools are falling behind the rest of the world is widely accepted, but a new analysis of international data suggests that using rankings to sort global winners from losers is often misguided, exaggerating tiny differences between countries that may be producing nearly identical results.  In other words, maybe U.S. schools are not as bad as you might think. "Sometimes rankings can make small gaps appear big and vice versa," says researcher Tom Loveless of the liberal-leaning  Brookings Institution  think tank. Loveless, whose analysis is out Thursday , looked at statistics showing that the  United States  in 2007 ranked 11th among 36 countries in fourth-grade math. Re-examining the data, he found that when nations with "statistically indistinguishable" scores were grouped, the U.S. group — which includes Germany , Denmark and the Netherlands — was essentially in fifth place worldwide. Enlarge By Rich Pedroncelli,, AP U.S. public schoo
Post a Comment
Read more

Would you miss your school staff room? 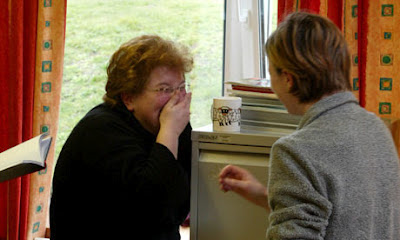 Mikey Matthews Guardian Professional ,  Saturday 25 February 2012 08.15 GMT Article history These days staff rooms are emptier than they used to be, but can you imagine not having a space to have a laugh or much needed moan with colleagues? Photograph: Graham Turner for the Guardian When I was at school, the staff room held an almost mystical station within the school. Along with the head's office, it was the one place that you hoped you would never be sent to. Being sent there was a frightening experience; that long walk down the corridor, the smell of Woodbines filled the air. By the time you arrived you were overcome with the heady scent of nicotine and coffee. On the opening of the door it was like being smacked in the face by  Mr Nick O'Teen , only I didn't have Superman to save me (I fully understand that anyone under the age of 30 won't get this obscure reference). I'm sure this never happened but I have a vague memory of a teacher actually opening t
Post a Comment
Read more

Can you take a guess? 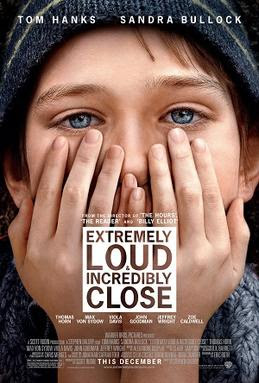 Image via Wikipedia tree of life (Photo credit: drwhimsy ) Sunday 26 February . Everything is ready for another edition of the famous  Oscars , but do you think you'd be able to bet on the winners? Well, let's try! Here you are some trailers of some nominees for Best Picture ; actually, these are the movies I think stand a chance, but let's see if you can take a  guess and choose the winners. Your comments are always welcomed, of course! The Descendants  Extremely Loud and Incredibly Close The Tree of Life War Horse Related articles Oscar trivia - I see double (glenwj.wordpress.com) Happy Oscar Sunday: We Know Who will Win 2012 Oscar Awards! A Guess (hitechanalogy.com) My quick-and-dirty Oscar picks (OK, not that quick) (mommytongue.com) Oscar week analysis 2012: Best Picture (therepublika.com) 2012 Oscar Nominees: Will 'The Artist' Win Best Picture? (inquisitr.com) The Oscars: The 84th Academy Awards Are Upon Us... (eof737.wordpress.com)
Post a Comment
Read more

Teaching For The 21st Century 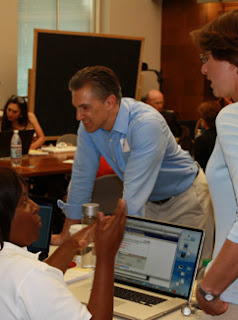 This online course will introduce participants to various tools that allow students to communicate, collaborate, and create with one another and make their thinking visible.  The course consists of six lessons, with one new lesson every other week. The lessons are conducted asynchronously, so participants can complete their lessons at any point during the week, and each lesson is design to take approximately 45 minutes. Each lesson will include an introduction to a new tool, a chance to try out the new tool, and then an opportunity to discuss ways the tool might be useful in your classroom. Related articles Technology Resources For The Classroom (optionsanimal.com) Teaching History in a Digital World (historytech.wordpress.com) Digital Educators Needed for 21st Century Digital Learners! (oldschoolteach.wordpress.com) TenMarks: 21st Century Math Instruction Has Arrived! (myclasstech.wordpress.com) Teaching Digital Photography to Year 3 (simonhaughton.co.uk)
Post a Comment
Read more 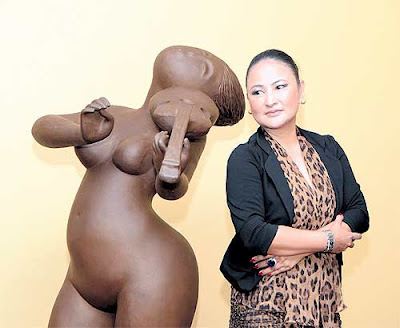 Patchana Sangket, managing director of Rocla Fine Art Co Ltd,  poses  beside one of her most  celebrated  works of a voluptuous  woman. PHOTOS BY WIPAWAN THAITHANAN AND PRADYA WUTTHITHUMRONG Artist in a mould all of her own Nauvarat Suksamran A bronze work  depicting  a sitting girl. " Thai people 's skills are comparable to those of western artisans  or may even  surpass  them. Our works are  delicate , ornate  and most importantly, labour costs are far cheaper," says Patchana Sangket, a highly successful  bronze   casting artist from Lop Buri.  Here is a long excerpt from a story in today’s Bangkok Post about world-famous artist few Thais know about. The full story, with many more photographs, can be found here:  http://bit.ly/wpjlMG   Related articles Castle Fine Arts Foundry at Llanrhaeadr YM (insideoutart.co.uk) Designer Interview - Dorus Mhor (boticca.com) Exploring Tamilnadu Handicrafts - Bronze Idols, Metal-ware, Wood Craft, Tanjore Painting (chennaifoc
1 comment
Read more 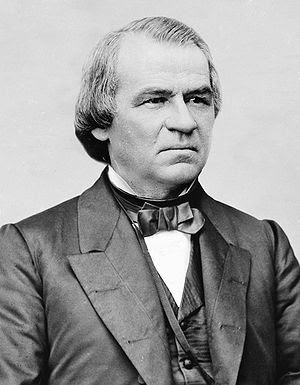 Image via Wikipedia On Feb. 24, 1868, Andrew Johnson became the first U.S. president to be impeached; the Senate subsequently acquitted him by a single vote. House Impeaches President Johnson Andrew Johnson was sworn in as president after President Abraham Lincoln was assassinated  in April 1865. Lincoln, a Republican , had chosen Johnson, a Democrat who served as military governor of Tennessee , as his running mate for re-election in 1864 because he was a southerner who supported the war and was loyal to the Union . The main issue facing Johnson was how to  readmit the Southern states that had seceded . He opposed military rule over Confederate states , pardoned rebel soldiers and returned property to rebels. He also vetoed two bills passed by the Republican-controlled Congress that established rights for freed slaves. Related articles New book focuses on Andrew Johnson during Civil War, Reconstruction (knoxnews.com) All You Need to Know About Impeachment (dennishernz.wordpr
Post a Comment
Read more 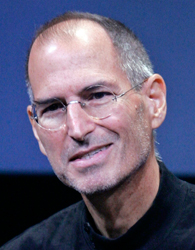 Born to a machinist father and accountant mother  in a pocket of northern California now known as Silicon Valley , Steve Jobs was quickly drawn to the wealth of technology and innovation that surrounded him, going to work for Hewlett-Packard on summer breaks during high school. There he met a college dropout named  Stephen Wozniak , who worked as an engineer, but was drawn to creating electronic gadgets. The two would meet again after Jobs dropped out of Reed College in Oregon , when they both worked as game designers for Atari . Far from content with following another’s path, Jobs proposed that Wozniak help him build a personal computer of his own, providing a hands-on alternative to the massive machines that had defined the field until then. Related articles 15 Things You Didn't Know About Steve Jobs (currentindiaaffairs.wordpress.com) Happy birthday! Steve Jobs (ibnlive.in.com) Steve Jobs? You're doing it wrong [Pic] (winextra.com) Kindle Daily Deal! All About
Post a Comment
Read more 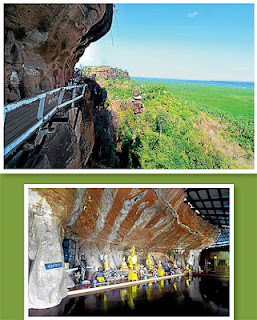 Bung Kan, Thailand's newest province, has a lot to offer visitors. Here are a few facts to get you started. A Phu Thok is a northeastern word meaning  lone  mountain. It is actually a  twin  sandstone mountain—Phu Thok Yai and Phu Thok Noi —in Ban Kham Khaen of Si Wilai district . Nestled  715km northeast of Bangkok is Bung Kan – Thailand's newest province. It was part of Nong Khai before being carved out  and  declared  the country's 77th province on March 22, 2011. Covering around 4,300km2, this province comprised  of eight districts is full of mountains and waterways and rich in Thai and Lao  culture  since Laos is just across the Mekong River . Related articles Mekong River hydropower assessment wins int'l award (lookatvietnam.com) Departing on my Maiden Trip to Bangkok, Thailand (calvintimo.com) You: 3 suspected militants killed in southern Thailand (nation.com.pk) Major fire at Burma refugee camp in Thailand (telegraph.co.uk) Trouble? - Nong Kha
Post a Comment
Read more
More posts