Bicycle Education Soon To Be Pedaled In Fort Collins 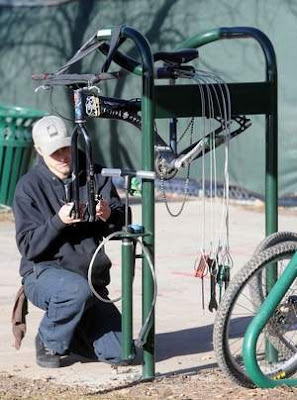 Kris Swanson, a bike mechanic from Brave New Wheel bike shop works at a bike fix station on the CSU campus in February. A new Bicycle Ambassador Program soon will help to educate cyclists in Fort Collins. V. Richard Haro/Coloradoan library
More bicycle education and information is about to hit the streets of Fort Collins with a new Bicycle Ambassador Program coming to local neighborhoods.
In an effort to take Fort Collins to the next level as a bicycle community, the city, along with the Bicycle and Pedestrian Education Coali-tion, or BPEC, is launching the Bicycle Ambassador Program.
Bicycle ambassadors will be trained and equipped volunteers riding Fort Collins' streets and trails, offering education, assistance and advice about the rules of the road.
To launch the Bicycle Ambassador Program, the city and BPEC are launching a weeklong series of bicycling events beginning April 17.
The new program is aimed, in part, at the casual cyclist who might ride every once in a while but is impeded by small issues such as flat tires.
The City Council first recommended the program in March 2010 following cyclist fatalities, said Molly North, Fort Collins interim bicycle coordinator. Out of that recommendation, the Bicycle Safety and Education Plan and Master Cyclist Program were created in March 2011.
In developing the new program, Bike Fort Collins examined cities such as New York, San Francisco, Portland, Philadelphia and Washington, D.C., all of which have similar programs.
The city and BPEC collaborated to rename the Master Cyclist Program the Bike Ambassador Program, which encompasses five sectors of cycling: CSU, adults, children, community patrol and neighborhood open garages.
The community patrol and neighborhood open garages are new.
North said community patrol, patterned after a Portland, Ore., program called 21 Ambassadors, will be a number of volunteers riding their bikes through the community and offering assistance, advice and encouragement to fellow riders.
Designated by cards, hats and T-shirts, the ambassadors will reward riders who obey the law with items such as bike lights and try to educate cyclists who are breaking the rules of the road, North said.
Volunteers will be trained in conflict resolution and could ride in tandem with police.
"It creates conversation and comfort around the bicycle," North said. "This will be a group of volunteers that want to improve our local cycling community."
The neighborhood open garages are spearheaded by local bike shops throughout the city who will find residents living in their sector to partner with.
Bike shops will provide tools, training and resources to the resident volunteer, who will provide basic bike tune-ups and services for people living nearby.
North said the hope is the garages will encourage more people to get their bikes in working order and ride, thus driving more business to the bike shops. The open garage volunteers will all be insured and released of all liability.
With the three existing programs, North said the city has around 60 volunteers and is looking for an additional 50 for the two new initiatives.
"This is an effort to propel Fort Collins toward a platinum level," the highest designation for bicycle-friendly communities by the League of American Bicyclists, North said.
http://www.coloradoan.com/article/20120407/NEWS01/204070336/Bicycle-education-soon-pedaled-Fort-Collins?odyssey=nav|head