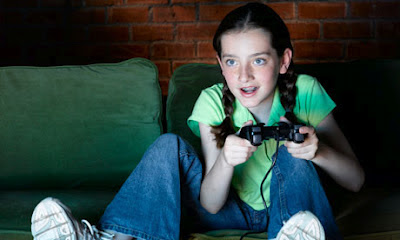 Psychologists have expressed concerns that playing some video games makes children more aggressive, Photograph: Tim Hawley/Getty Images
Jessica Shepherd, education correspondent
guardian.co.uk, Tuesday 3 April 2012 15.55 BST
Article history
A growing number of young children are acting out violent scenes from adult computer games in the playground, teachers have warned.
Pupils as young as four and five are simulating car crashes and graphic injuries as a result of playing games unsupervised in their bedrooms, the Association of Teachers and Lecturers (ATL) annual conference was told.
A motion at the conference called on ministers to introduce "stringent legislation" to counter the "negative effects some computer games are having on the very young".
Primary school teachers said the games were making their pupils far more aggressive and addicted to "fantasy worlds that separate them from reality".
Doctors found children who continually play computer games may be more likely to develop tendinitis – an inflammation between the muscles and bones – and suffer from seizures, teachers said.
Psychologists have expressed concerns that playing some games make children more aggressive.
The teachers fear that by spending hours alone playing the games, children could become anti-social and slow to develop speaking and listening skills. Many pupils arrive at school exhausted having played the games until the early hours of the morning, they said.
Alison Sherratt, a teacher at Riddlesden St Mary's Church of England primary school in Keighley, West Yorkshire, said her four- and five-year-old pupils spend their breaks pretending to "throw themselves out of the window of the play car in slow motion" and act out blood "spurting from their bodies".
"We all expect to see rough and tumble, but I have seen little ones acting out quite graphic scenes in the playground and there is a lot more hitting, hurting and thumping in the classroom for no particular reason."
She said her pupils believed the violence depicted in computer games was real and tried to recreate it in play.
"Obesity, social exclusion, loneliness, physical fitness, sedentary solitary lives – these are all descriptions of children who are already hooked to games … Sadly there is a notable correlation between the children who admit to playing games and those who come to school really tired," she said.
Mary Bousted, general secretary of ATL, said many teachers were worried that parents ignored age restrictions on games. "The watershed tends to work quite well, but with online TV and video children and young people are probably watching inappropriate content over a range of media," she said.
"It's about reminding parents and carers that they have a very real responsibility for their children and that schools can't do it alone."
Meanwhile, teachers have called for the government to abolish a website that allows parents to rate schools. Teaching unions claim the site gives anyone with a grudge against a school free rein to make an unfounded claim.
The Parent View site, launched by the school inspectorate Ofsted last year, encourages parents to assess state schools against 12 criteria. A school or college with poor ratings may receive a visit from inspectors. Parents researching potential schools for their children can log in and see the comments.
Robin Bevan, a teacher at Southend High School for Boys in Essex, told the ATL conference the website hosted views that "may not be an accurate reflection of parents' views" and that there was no attempt to verify whether those posting comments were "genuine parents".
An Ofsted spokesman said parents had to register with a password and an email address to post on the site.
http://www.guardian.co.uk/society/2012/apr/03/children-addicted-violent-games-warn-teachers