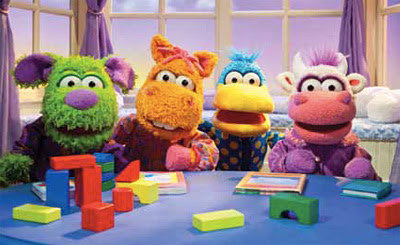 “Pajanimals” is an original short-form musical series produced by the Jim Henson Co. and 4KIDS Entertainment.
Content is king this week at the aptly named Content Theater, sponsored by FremantleMedia, with today's schedule playing host to a number of sessions ranging from kid fare to the current global surge in telenovelas to delivering content targeted for consumption beyond traditional TV to a growing array of digital devices and services. Thursday's lineup looks at a popular filmmaking competition and comedy videos on YouTube."Content is critical as new media and new technologies are being created," said Daniel Tibbets, senior vice president of digital media at Bunim/Murray Productions in Van Nuys, Calif. Tibbets is a panelist in "Broadcasting Beyond Television," 10 a.m."Content really is king. As a lot of tech companies create innovative ways for consumers to interact with new media, the question becomes, 'Exactly what is that interaction going to be?'" said Tibbets. "We see more and more cross-platform storytelling, so how do we tell our stories both from a traditional Hollywood standpoint and in newer ways so consumers really do engage with all that new media we have available to us?"Digital content distribution means two things to me: the physical dissemination of television media across various platforms, like maybe an episode of 'The Office' playing out on various devices," said Tibbets. "The second element that's even more fascinating is social distribution such as YouTube, which can operate around the 'idea' of content. After we place it there, how do we engage the audience in a meaningful way?" Tibbets' fellow panelists include: Karrie Wolf of Kinetic Content; Joe Michaels of Microsoft; and Zane Vella, Watchwith. The panel is moderated by Lori Schwartz of McCann Worldgroup.
"TV Trends: New Telenovelas" is next up at 11:30 a.m., examining what may be the fastest-growing trend in television drama — not only in Latin America where telenovelas originated, but globally. Telenovelas currently air in dozens of non-Hispanic countries, including Israel, Romania and South Korea.The one-hour panel discussion includes Dom Serafini of VideoAge International; Cesar Diaz of Venevision International; Jessica Rodriguez of Univision Communications; Ricardo Scalamandre of TV Globo; and Marcel Vinay of TV Azteca."Children's Programming and Licensing," follows at 1:30 p.m., scrutinizing the surging demand for quality kidvid. According to Hasbro Studios President Stephen Davis, a panelist, "Demand for kids' programming based on well-known global brands has never been stronger, and extends beyond the scripted fare that has traditionally dominated the branded import-export space."
International broadcasters are increasingly interested in acquiring reality and game-show formats based on familiar brands, he said.

"In fact, shows adapted from board games such as 'Family Game Night' have become a significant part of our overseas strategy — filling a void in the marketplace for kids' and family game shows after a long drought in that genre," Davis said. "We're even creating local formats in particular territories and exposing a number of Hasbro games to those markets."Fellow panelist Andy Heyward, co-president of A Squared Entertainment in Los Angeles, said the new multiplatform world is ideally suited to the younger set. "Kids are always the early adopters of any new technology. They intuitively take to these new devices without trepidation. It's like when independent [broadcast and cable] stations starting coming on years ago, they programmed heavily to kids because children were not already in the habit of going to one network or another. Even before they're reading, they're able to intuitively use these devices," Heyward said.
Panelist Richard Goldsmith, executive vice president of global distribution for The Jim Henson Co., said, "Kids, especially, want to watch what they want, where they want, and when they want. When you go to a kids' soccer match in Los Angeles, the players' younger brothers and sisters are all on the sidelines with their iPads watching something," said Goldsmith, whose shop is home to the Muppets."There's even been success with babies and toddlers intuitively taking advantage of these platforms, obviously with some help from mom and dad. And I hear Apple now sells more iPads to schools than its PCs. That's kind of a telling tale of where we're headed," Goldsmith said. Also on the afternoon kidvid panel is Steven Ekstract of License! magazine.From 3–6 p.m., the "Best in Show" from this year's New York Festivals global competition will be screened in "New York Festivals International Television & Film Grand Trophy Winners."The curtain falls on the Content Theater tomorrow morning with two sessions: "Best of the 48 Hour Film Project," 9:30, a special presentation in cooperation with the NAB Show and produced in partnership with 48 Hour Film Project; and "YouTube's Best Comedy Videos," noon–1 p.m.Theater admission requires a ticket (free) as limited seats are available for each session. Daily session tickets will be distributed at the Content Theater ticket booth, 7:30 a.m.–5 p.m. on Wednesday and through 1 p.m. on Thursday. One ticket per person, per session. Attendees without tickets may choose to wait in line and will be allowed to enter if tickets are not redeemed and as space permits. Doors open 10 minutes prior to each session.
http://www.nabshowdaily.com/2012/NabShowToday/128472