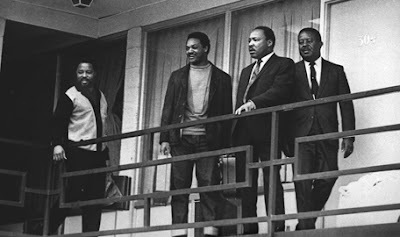 Associated PressMartin Luther King stands with Hosea Williams, Jesse Jackson and Ralph Abernathy on the balcony of the Lorraine Motel on April 3, 1968, a day before he was assassinated at approximately the same place.
April 04, 2011 06:00 AM
by findingDulcinea Staff
On April 4, 1968, civil rights leader Martin Luther King Jr. was shot while standing on a hotel balcony in Memphis. Small-time convict James Earl Ray was sent to prison for the crime, but the King family believes the assassination was part of a larger government conspiracy.

In the late 1950s and ‘60s, Martin Luther King led the Civil Rights Movement, which culminated with the passage of the Voting Rights Act of 1964 and 1965. In the ensuing years, King shifted his focus to anti-poverty and anti-war campaigns.In March 1968, King went to Memphis to campaign for the rights of black sanitation workers. On March 28, he led a March that turned violent, a sign of the increasing militancy of black rights movements, which contrasted to King’s nonviolent teachings.He returned to Memphis on April 3 and delivered a speech now called “I’ve been to the mountaintop,” at the Bishop Charles Mason Temple. In it, he expressed that he was not afraid of death.
“Well, I don't know what will happen now; we've got some difficult days ahead,” he said. “But it really doesn't matter to with me now, because I've been to the mountaintop. And I don't mind. Like anybody, I would like to live a long life—longevity has its place. But I'm not concerned about that now. I just want to do God's will. And He’s allowed me to go up to the mountain. And I've looked over, and I've seen the Promised Land. I may not get there with you. But I want you to know tonight, that we, as a people, will get to the Promised Land.”The following evening, King stood on the balcony of the Lorraine Hotel and spoke with Jesse Jackson, who was standing in the courtyard below. Ralph Abernathy, another friend and civil rights leader, was stepping out of the room to join them when a single shot from 100 yards away hit King in the neck.King collapsed and was taken to nearby St. Joseph’s Hospital, where emergency surgery failed to save his life. He was pronounced dead at 7:05 p.m., an hour after being shot.Robert F. Kennedy, speaking at a campaign rally that night, echoed the ideals that King had lived and died for: “What we need in the United States is not division; what we need in the United States is not hatred; what we need in the United States is not violence and lawlessness; but love and wisdom, and compassion toward one another, and a feeling of justice toward those who still suffer within our country, whether they be white or whether they be black.”
The aftermath of King’s shooting was characterized by widespread outrage and violence, with riots breaking out in more than 100 cities across the U.S. While civil rights leaders close to King advocated unity, militant black leaders called for a violent struggle.

Police arrested escaped convict James Earl Ray, who pleaded guilty and was sentenced to life in prison. Ray later recanted and said he had been set up. Nonetheless, his confession was upheld eight times and he died in prison in 1998.Some King family members believe that King was a victim of a government conspiracy designed to end the major anti-poverty reforms he had planned. “The economic movement was why he was killed, frankly,” claims Martin Luther King III in a 1998 interview with Newsweek. “That was frightening to the powers that be.”J. Edgar Hoover and the FBI kept King under tight surveillance, believing that he had ties to communists. In 1964, after King received the Nobel Peace Prize, the FBI sent him an anonymous package containing recordings of him speaking sexually to females and a threatening note concluding, “You are done.”
In 1999, the King family won a civil suit against Memphis restaurateur Loyd Jowers, a retired Memphis businessman who allegedly hired a policeman to kill King. Afterwards, Dexter King, son of the Rev. King, declared that the trial had revealed “most incredible coverup of the century.”

But some reject the conspiracy theory. King biographer David J. Garrow writes in Salon that the evidence in favor of a conspiracy “amounts to nothing more than fabricated stories told by people motivated by the expectation of Hollywood movie riches and, in some instances, actual up-front cash payments.”

One close friend of the King family told Garrow, “They’ve got to blame someone else more important [than Ray], no matter what the evidence.”

The findingDulcinea Web Guide to the Civil Rights Movementfeatures links to the best primary and secondary sources on the movement.
http://www.findingdulcinea.com/news/on-this-day/March-April-
08/On-this-Day--Martin-Luther-King-Jr--Assassinated-in-Memphis.html